For a weekend project I built a backlight array for my TV which gives off ambient lighting according to what colors are being shown across the edges of the screen. Powered by a microduino and Abalight software for Mac.

According to the experts, backlights offset the brightness of the screen by lighting up the entire wall, while also giving the impression that the movie is bigger than just the screen.  I just say “woot.”

The Dalai Lama, when asked what surprised him most about humanity, answered:

“Man…. Because he sacrifices his health in order to make money.

Then he sacrifices money to recuperate his health.

And then he is so anxious about the future that he does not enjoy the present.

The result being that he does not live in the present or the future;  he lives as if he is never going to die, and then dies having never really lived.”

I had been wearing a demo Apple Watch Sport for a few days, when I noticed a few scratches on the screen. Damn, I thought. It had only been a few days and I hadn’t bumped or scraped it on anything significant. In addition, I had been cleaning it with a microfiber cloth, so I was sure it hadn’t been from that. But it was still odd considering how long I’ve had an iPhone 6 with no cover and 0 scratches. So I did a little digging.

Sure enough there are a few threads on Apple’s own website detailing how common, everyday usage is resulting in scratches. Disappointing, but maybe people are simply being careless. However, for some non-transparent reason Apple has also quietly updated their product text removing all mention of being scratch resistant.

Rolling back 2 weeks on Apple’s own product page for the watch, we see the following text. Notice the phrase, “especially resistant to scratches and impact.” But if you look at the current version of the product page, you’ll see this text. Here’s my recent talk entitled “Chasing 60fps, Using ReactJs to Rebuild Netflix.com.”  We discuss both the advantages and challenges of building with ReactJS for the new Netflix UI. Introducing the completely rebuilt MTG Scavenger. Everything has been rebuilt from the ground up to provide a faster, more responsive user experience, tuned to exactly what you’re looking for. One of the biggest new features that’s been added is the ability to add your own custom card values. So if you feel the current card value is too high, you can change it!

Wait! What is this?
I built this to find cards ending soon on eBay, trimming out all the “fat” and showing only cards that are under valued / under priced. There are a ton of filters, so you can hone in the results to exactly what you’re looking for, then save/bookmark your filters to check in on only the auctions you care about. Basically it saves you tons of time, giving you a competitive advantage on buying magic cards.

Coming Soon
* Set custom pricing in other currencies
* Get notified when a card is ending below your custom price
* Lots more!

The site is in beta at the moment and is by invite only for now. If you’d like to get in on the beta, here’s a few invite codes to get you started. If these run out, ask a friend or hit me up. I’d also like to hear your feedback so feel free to contact me, tony@mtgscavenger.com. Cheers!

Alright, I’ll admit it.  Even after 15 years, I’m still a huge fan of Magic the Gathering.  I love the game and I’m a huge collector.  So, like any other person looking to collect, I’m on eBay alot. But the problem with eBay is that I’m never quite sure what’s a good price for an item I’m interested in.  I’ve done the long, drawn out task of looking through completed listings, but it’s simply not scalable.  So, utilizing the WorthMonkey and eBay APIs, I created a “filter” for magic cards ending within the next 4 hours.  This filter shows the card auctions alongside their average selling price, so that I can quickly look for deals and know exactly how much I should bid to win.  I’m on this tool all day long and if your interested in giving it a try, it can be found here: 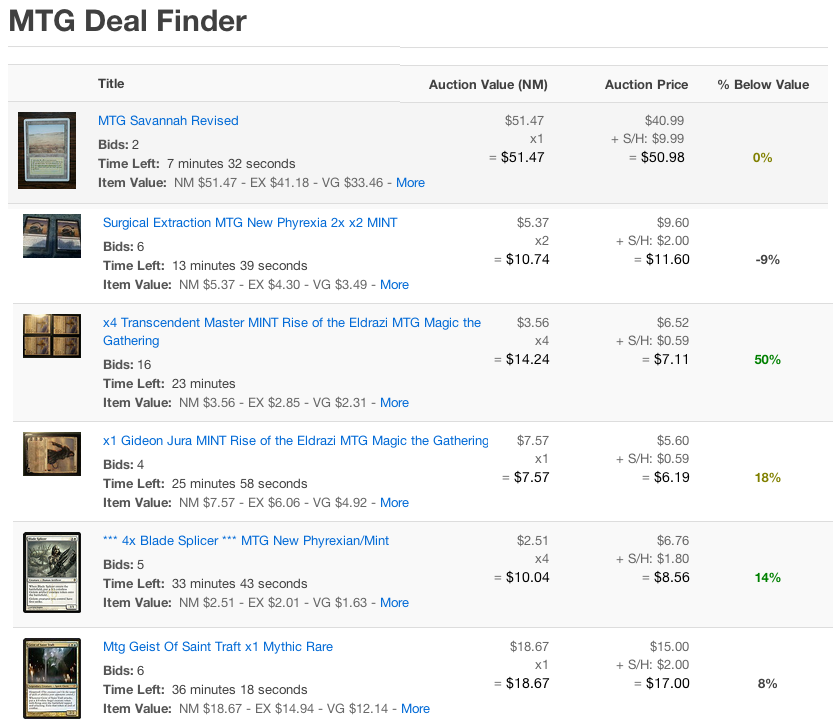 Having taken a recent interest in behavioral analytics, I devised a perfect hackathon project. The idea was simple; bring behavioral analytics to the masses by building a super lightweight platform with brain dead simple RESTfull event calls. Once the hooks were in place for any given website, we could monitor the site’s usage in real-time to alert the owner in the event of abhorrent behavior. Given that most website owners’ see their site as a black box, this product would give them huge insight into how their site is being used and abused. In addition, it would provide an audit trail for determining where vulnerabilities exist in the business logic layer. Already teamed up with Ben from Box, I discussed the idea with him and he, having a passion for security as well, was stoked. Later that evening, we begin thinking through the details of the platform. 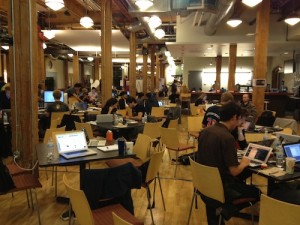 The morning of the hackathon we pulled together the final details of the project. We set up a server with the usual LAMP stack and memcache for speed. We utilized the Yii framework to facilitate the mundane aspects of creating a new website (Active Record, MVC, etc) and finalized the design of the database in MySQL. We left the designs until last because our main focus was creating an actual platform that would be demo-able in 24 hours. In the end, our final design resembled a standard dashboard with a “twitter” feed of hack alerts.

At 5 pm, the contest began and we immediately set to work on creating our platform. We had loaded up on sugar and caffeine, so we were amped up and ready to roll. Ben took the database implementation, creation of the models and set up of the REST hooks. I took the creation of the AJAX hook code, implementation of the dashboard and hooking the final pieces together.

The implementation of all pieces continued throughout the night with continued doses of caffeine and sugar. We began to see that our concept was too ambitious to complete in the time allotted, so we scaled back to only what was necessary for the demo and to illustrate the feasibility of the idea. This scale back ended up saving us in the end as we finished the implementation with 30 minutes to spare.

The long night was over and the presentations began at 6 pm. With over 35 teams competing, it took over 2 hours to get through all the presentations and there were some fantastic concepts being put forward. Ben and I were still enthralled with our own idea, but began to have doubts if we could truly take any award home. One after another the presentations continued. At 9 pm, it was time to announce the winners.

With great acclaim and response from the judges, our team won first prize to a roomful of applause. We had successfully killed it at the hackathon.

Check out the site here: bluedragonsec.com

Ben Trombley and I after winning the hackathon